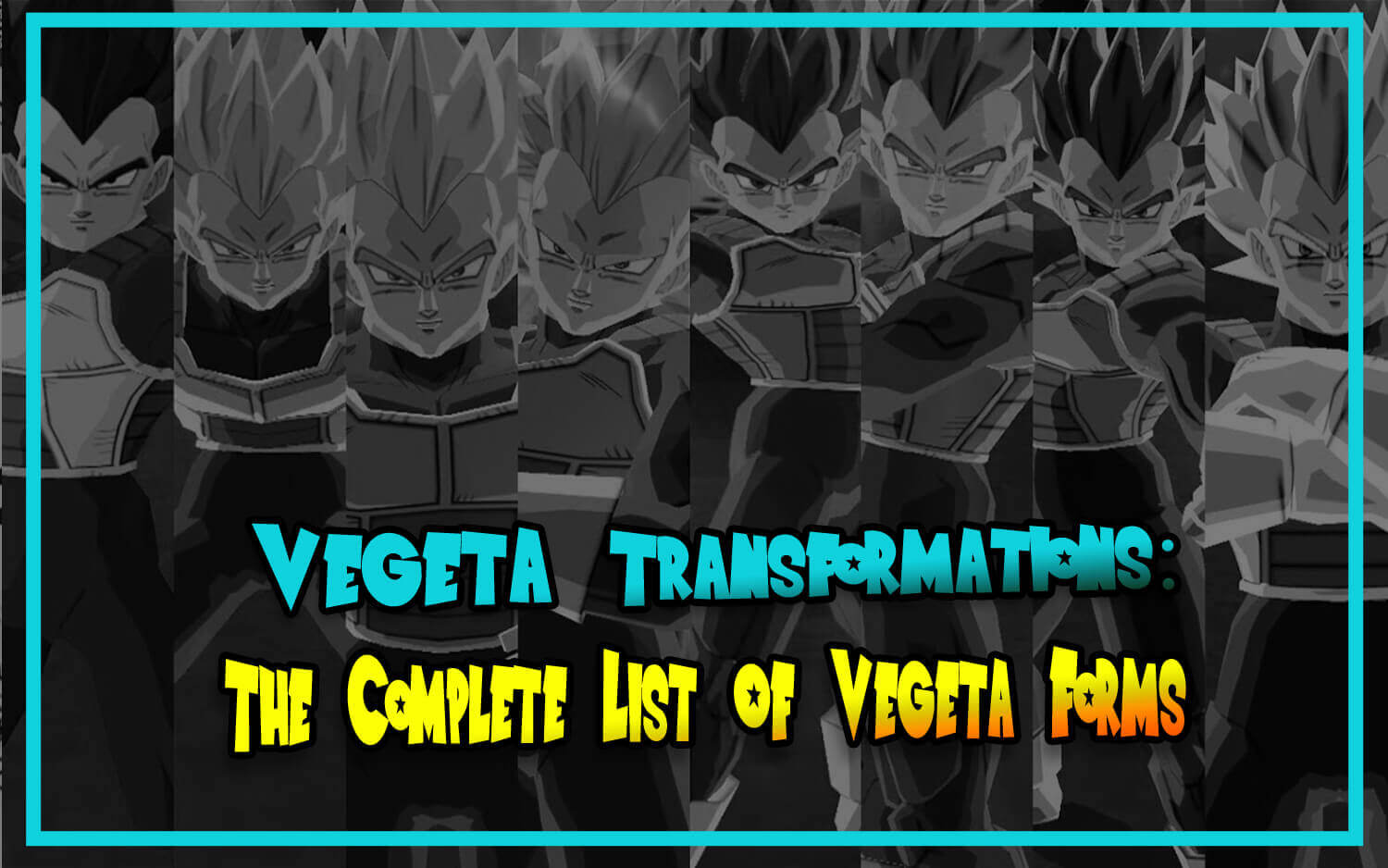 Dragon Ball is known for its intense transformations and forms of each character, turning them into a warrior fighter from hell. So with the extraterrestrial Prince Vegeta, of the warrior Saiyan race, it’s no different. Vegeta takes on many different forms when he prepares for a universal or worldly fight against another mortal or even God.

So, who exactly is Vegeta? Is he a God or a mortal? Is he on the good side of Goku or on the bad side? Before diving into all of his forms and transformations, we must know who Vegeta is and if we are on his side or if we want to see Goku destroy him.

Vegeta is an extremely cocky, arrogant Prince who becomes obsessed with beating Goku due to losing his first battle with him, so he makes it a point to try and train as hard as he can so that he can beat Goku in the next battle. Sounds like most of the DB characters, right?

He wants to be known as the strongest fighter, and over a short period of time, Vegeta ends up being one of the most favorited Dragon Ball characters to date. And while he does remain Goku’s enemy throughout the entire series, he does at least turn from his evil ways and becomes more of an antihero instead of this sadistic, twisted mortal.

He then goes on to become a hero in the end which doesn’t change his status with Goku, but does with a lot of viewers and fandoms. 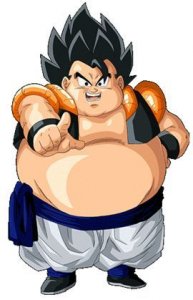 We’ll start with the assumed weakest form of all Vegeta’s transformations, Veku. During Vegeta and Goku’s fight with Janemba, the two fuse together and what was supposed to be a powerful creature ends up just being a short, chubby, non-violent Veku. It was such a useless transformation that this was the first and last time it was ever used on Dragon Ball. 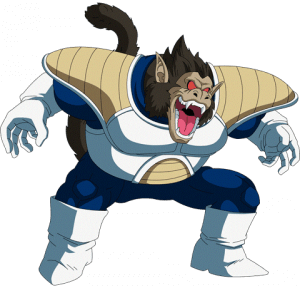 The Great Ape transformation was always a comedic one for most, being that the user of the form would literally turn into a huge, raging, angry ape with 10 times the power of what it held as a human. What makes it even more comical is the long tail the user obtains during this transformation. Most say that this form was a disaster from the beginning.

On the plus side, Vegeta was one of the only mortals who could turn into the Great Ape and not lose himself in the process. Even Goku had to sacrifice a sound mind to turn into this beast which made Vegeta a force to be reckoned with during this state because Vegeta can keep his sound mind while still maintaining super-human strength. Strong arms and a strong fighter coupled with a strong, sound mind is a lethal combination. 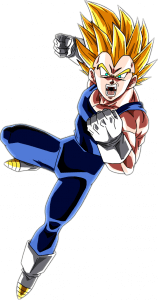 Because the transformation into a Super Saiyan was so highly favored during Dragon Ball Z, this left Vegeta fighting Goku every step of the way to achieve the same status that Goku could achieve. It took Vegeta a while to do it but he finally was able to take on the Super Saiyan status and when he finally did, he actually became stronger than Goku was during it. 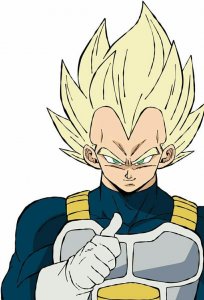 Super Vegeta arose during the Cell saga while Vegeta and Trunks trained until near death just so they could end up being the one to beat Cell. The training must have worked as the two fused together becoming this ascended Saiyan of sorts, Super Vegeta. This super Saiyan is a pale, hulk-like fighter with the muscles of a bodybuilder. 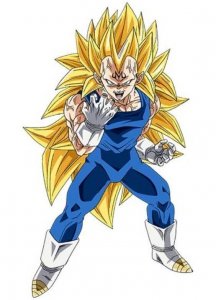 Although Vegeta was finally able to obtain the form of Super Saiyan 3, while he had the looks of his rival Goku with the luscious blonde locks, he still would not possess nearly as much strength and capability in this form as Goku can. Nevertheless, it’s a pretty cool sight to see Vegeta in this form when it was nearly impossible for so long to be achieved. 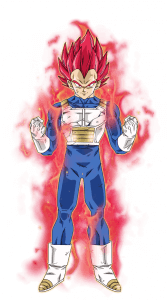 The God-like Saiyan form is specific to Vegeta as he taps into this transformation and begins to feel as if he is a divine presence here to overtake and rule over the world as a God, instead of his usual mortal self. That’s what makes this form so intriguing, nobody ever thought Dragon Ball would or could mix humans with Gods, not ever in the series at all and certainly not one of Vegeta’s transformations. Still, this is the power Vegeta must obtain to tap into his Super Saiyan Blue form also.

To tuffleize in Dragon Ball is to destroy the Earth with parasites, which was a function that Baby, a machine mutant, was able to do. Because of this, Baby would go on to hypnotize and possess Vegeta, and while possessed, Vegeta would gain out-of-this-world strength to use against Goku, almost throwing around Goku as if he were a rag doll. 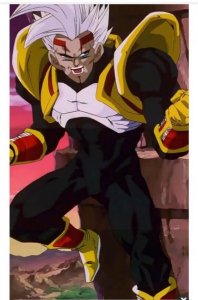 Once the first tuffleize occurred, Vegeta had now formed into “Baby Vegeta” which was of course, a fusion of Vegeta and Baby. Even though this form is dubbed as the strongest form in the whole universe, Vegeta is unable to keep the transformation going for too long so he doesn’t stay in the form long enough to cause the damage that he truly could cause if he had more time. 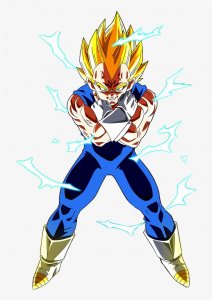 Super Saiyan 2 is essentially a stronger version of the original, with longer and spikier hair mixed with even more power and even more speed. 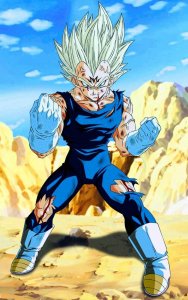 Majin Vegeta is considered a form that is Super Saiyan 2 on steroids, giving Vegeta dramatically enhanced natural energy, supernatural powers, unlimited supply of stamina and he even possesses natural healing magic where he can heal himself or regenerate his cells that are lost or damaged in a fight. This makes Majin Vegeta one of the most hardcore forms that ever was on Dragon Ball. How do you destroy something that keeps healing itself? 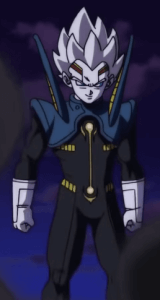 You guessed it, this is the continuation of the strongest form in the universe, being most equivalent to Super Saiyan 3 in nature and strength. 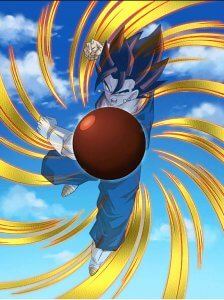 It most certainly is what it sounds like, Vegeta does turn into a piece of candy, creating the transformation of Vegito as Candy. So, how does he become a piece of candy and why? It’s probably important to point out that he becomes a jawbreaker, not a lollipop or bubblegum, so the hard exterior already tells you that maybe this form ain’t nothing to play with.

Goku and Vegeta use the Potara earrings to fuse together in this form, creating Vegito, a super powerful character and form. This is the beginning of all forms of destruction from Vegeta. 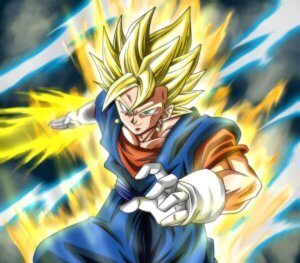 Super Vegito is just an amped version of the original Vegito, with that extra hit of power that you just don’t see with the regular form. This form came about when Vegeta became jealous of Super Buu and his form and decided he wanted to create his own “Super” version. 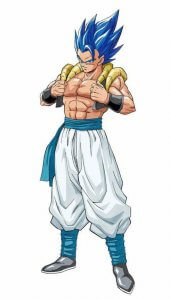 Goku and Vegeta must fuse together once again to defeat a powerful demon reeking havoc on Earth and the universes, and thus Gogeta is born. Unlike Veku, this fused version of the two is more realistic as far as having superhuman strength and the ability to kick ass. Gogeta possesses some absolutely brutal power and maintains speeds up to measurements that aren’t even fathomable, speed that isn’t even caught on the scale of speed because it is so fast. 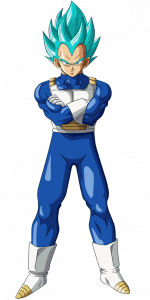 Vegeta became so jealous of Goku and his transformations that he would stop at nothing to achieve the same forms or higher. His jealousy and training would pay off somewhat when Vegeta was finally able to possess this form just like Goku, turning him into this blue God-like creature with abilities that were literally out of this world. 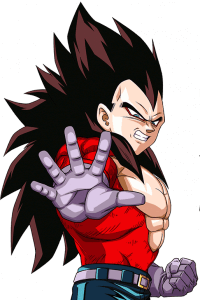 Super Saiyan 4 is just another even more powerful of the next Super Saiyan form. And when Vegeta possesses this form, he’s just as good as any Goku SSJ4 form, making him just as lethal and almost hard to defeat. 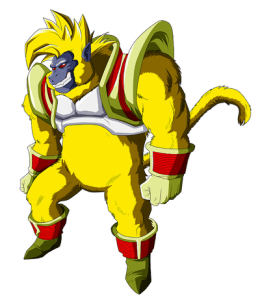 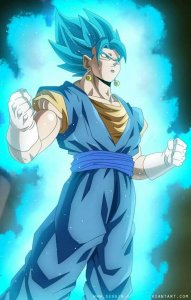 This form takes place when Super Vegito activates his divine Ki and Super Saiyan Blue forms, fusing them into one powerful overwhelming force. However, even with this form being super powerful and near the top of the list, it still wasn’t strong enough to defeat Zamasu, one of their most powerful enemies to date. 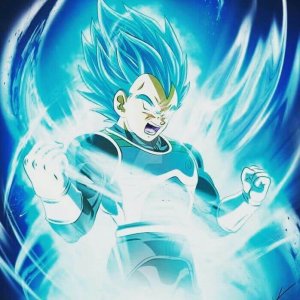 Also known as the Super Saiyan Blue Shinka, this is the only form specific to Vegeta and used by Vegeta religiously. The reason it is so powerful is as it fuses two gods together, mixed into a superhuman mortal body. Vegeta was able to beat Toppo during this form, which is one of Beerus’s partners in crime. 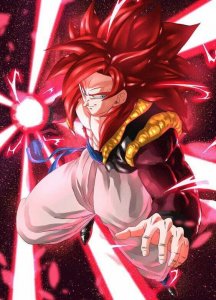 SSJ4 Gogeta is a fuse inspired by Super Saiyan 4 Goku and Vegeta in Dragon Ball GT, becoming the most powerful, most notorious form or transformation that Vegeta will ever obtain. The reason that SSJ4 Gogeta falls at number one in the strength department against all of the others is simply the unmatched power and how none of the other transformations would ever be able to compare.